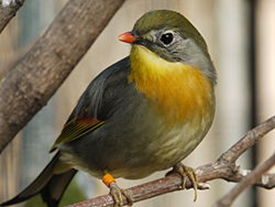 Red-billed leiothrixes is kind of sparrows. They are animals of foreign origin. Originally, they live in India, China, Vietnam, and Myanmar. Now they live in Kanto, Kinki, Chugoku, Shikoku, and Kyushu in Japan. They look so pretty, but they are feared to break the ecosystem. They expel bush warblers.They are “Worst 100 of Japanese aggressive introduced species”.

Description and Taxonomy
Their total length is 14~15cm. The feather of back is green. The neck is yellow. There have red spot in the wing. The bill is red. They twitter in large voice. They eat insects, fruits, and seeds. Their breeding season is April~October. It is comparatively long. It is less than a month to leave the nest from birth, so it is thought that they can breed several times a year.

Use and Conservation
In Edo era, they were imported for pet. But, they were imported frequently in 1980s from China. They were much imported because it is easy to take care of them, and it is cheap. Since invasive alien species act was enforced, pet shops had many stock of them. Pet shops did not have much money to feed them, so many of them were set free. It is prohibited to raise them from 2005.

Viewing
They are feared to break ecosystem. But many people like looking them, because they are so cute. They are in thicket in many cases, so we can look them near the ground. They make crowd, so we may be able to look many of them.